I’ve been keeping bees since 2003 and like all beekeepers, there is a scéal as to how I ended up with bee venom in my blood. My story begins with my grandfather Jerry Kevane who lived in Reenbee, just east of Dingle, Co. Kerry. My father told me that in the 1930s Jerry received two hives through the Congested Districts Board. Jerry was a meticulous man and in the weeks before the arrival of the hives, he acquired some old white flour bags from a local mill and fashioned himself a bee suit. My father recalled watching him sew the suit by candlelight. The bees arrived and, the very next day, Jerry set about “examining” the new arrivals. My dad sat on the ditch watching, with a mixture of excitement and awe, as his dad set to work.

END_OF_DOCUMENT_TOKEN_TO_BE_REPLACED 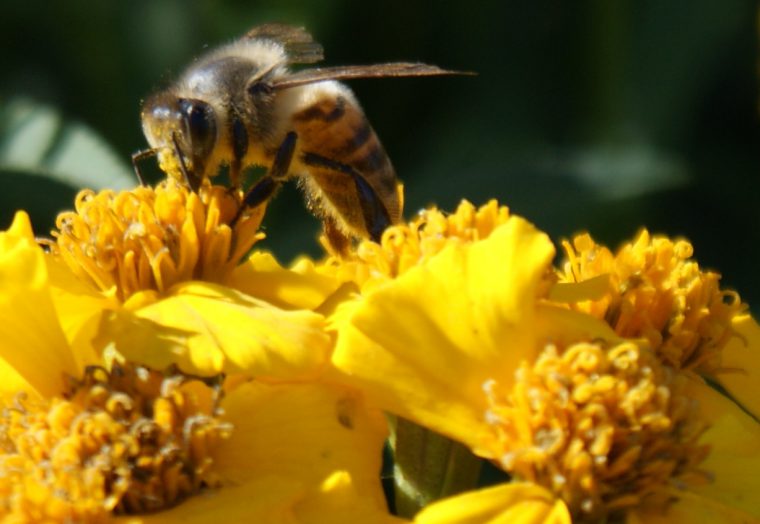 Earlier this month we had our EWBKA Beginners’ Course. We held it in the GIY HQ in Ardkeen this year and it made an ideal venue on many levels. Heather and her team were perfect hostesses and hosts and put a lot of work into advertising the event and organising bookings, food etc. (the food was excellent, produced in the HQ’s own kitchen) Mike Hughes really appreciated this as it was Mik, himself, who would have done all this, singlehandedly, over the previous years. Míle buíochas do gach duine san ionad FTF (Fás Tú Féin!!) We had eleven on the course and, hopefully, we’ll have eleven new keepers of bees in the Waterford area.

One section of the course dealt with choosing a site for your apiary and as our Secretary, Pat Crowley, delivered this talk my mind wandered to the quality of the site for my own hives. For the last few years, the Biodiversity Centre in Carriganore have bee-n kind enough to allow a few of us set up an apiary adjacent to their centre. Just like the good folk at GIY HQ, Thomas and his colleagues appreciate our buzzing friends and enjoy having them on site. It excels in one of the main criteria that defines the perfect site for an apiary – accessibility. You can drive right up to within a few metres of the hives. This is great, in April, when you’re bringing up the empty supers. But its brilliant, in August, if you need to carry full supers back to the car. Unfortunately, since we sited the hives there I’ve never had any great crop form any of my hives.

(At this stage Mike Hughes will break into song and dance about the “six super supers” that he got there a few years ago. But its a well-known fact that Mike talks to his bees and I’m reliably informed by my spies in the Biodiversity Centre that phrases like “Now my darlings, its ok to rob from Kavanagh’s hives” and “God save our Queen!” were heard on many occasions during that year’s Honey Flow. Bitter? I’m not bitter! I’m way past bitter!!)

As I was saying, while the apiary had excellent accessibility there hasn’t bee-n any great crop of honey. So I thought about Pat’s number one criteria when choosing a site – the availability of nectar and pollen. Immediately adjacent to the site in Carriganore are the following:

So, I had an idea to use Google Maps satellite view to look at my hives from on high and see what was available to my bees. As the bees will travel up to 1.5 miles when foraging I superimposed three circles marking 0.5 miles, 1 mile and 1.5 miles and here’s the result. 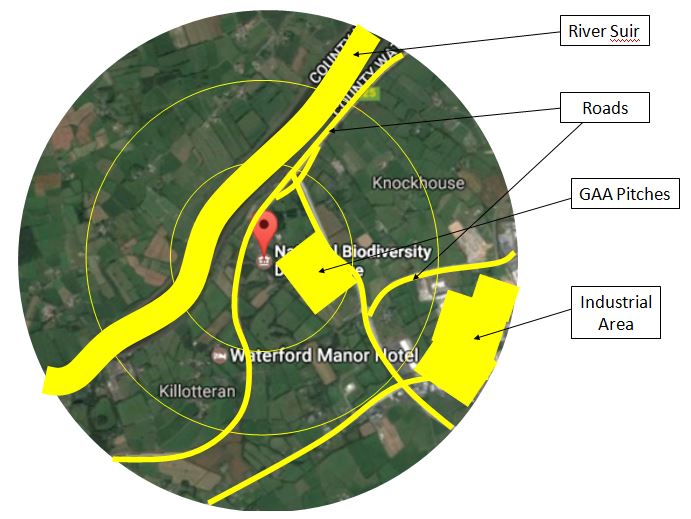 As you can clearly see the central circle is almost fully yellow so this isn’t a great site for foraging. However, it is a brilliant site for access. So, as a result of the above, I’m intending to move some of my hives to a different location. I’ll probably keep one there and also use the site to hold newly caught swarms.
Anyway, now with the recent burst of sun the dandelions are up and running and so is this year’s season. I’ll have my first examination of the hives within the next few days.

Resist! Resist!
The season is almost upon us and we’re all itching to lift that crown board to see what way things are……but we must resist this most evil of temptations!! We can learn all we need to know by simply observing the comings and goings of our hives. We, at the EWBKA, had an excellent talk last week from Irene Power and this was the theme of her talk, Observations Outside the Hive. If there’s pollen going in there’s brood in the hive. I always compare the hive traffic to somebody carrying their shopping from the car to the house. If you see packs of disposable nappies being carried in you can bee fairly sure that there’s a baby indoors! And its the same with pollen and brood. Bees won’t collect pollen unless there’s brood to feed. Now that the catkins are hanging on the willows bees are buzzy carrying the precious pollen to the hungry brood.

Hefting!
Does anyone outside of beekeeping know what “hefting” is? I can remember my father explaining the art of hefting to me and how “You’d know by the veight of it” (to be read with a Dingle accent!). I still remember hefting for the first time. All I knew was that it was quare heavy (to be read with a Wexford accent!). Although, in fairness, having hefted a few hives it was obvious when you had a light one. For those of you who have had a heftless existence to date, hefting is done as follows. Gently, remove the roof from the hive (this is because the weight of roofs of hives vary greatly and, thus, a heavy roof will cause a light hive to feel heavy). Then go to the back of the hive and put your hand under the back of the hive and lift the back of the hive, keeping the front of the hive on the stand. Then you just “feel” the weight of the hive. If the hive feels light then the source of weight is not present i.e. the hive needs food!! Fondant is the best food to give the bees in the spring. Just put about a pound of fondant in a plastic bag, flatten the bejaysus out of it and then cut a window in the bag and place it over the hole in the crown board. Check after a week and repeat if necessary. As this winter has been so mild the bees will have been more active than normal. A mild winter might appear to be good for bees but active bees are hungry and stores can be used up quite quickly. The next four weeks will determine if the bees make it through the winter as the struggle with various diseases and mites but it is a shameful thing if your bees die of hunger. So if in doubt get the fondant out!

A Grand Stretch in the Evenings?
The month of February is when nature’s alarm clock starts ringing. On the 1st of February there are 9 hours of sunlight here in Ireland with the midday sun’s rays hitting us at 20.7 degrees. By the end of February the amount of sunlight has reached 10 hours and 45 minutes and the angle of the midday sun reaching 29.8 degrees. We, as humans with clocks, all talk about the “Stretch in the Evening” but this is not the case for bees. As far as the bees are concerned the day ends at the exact same time every day of the year, at sunset! For bees the change is in the length of the middle of the day, the hottest part of the day, and this is what sets the alarms ringing all over nature. Buds burst open, frogs spawn, insects come out of hibernation and beekeepers think about lifting crown boards! (Resist, Resist!) Also, as the sun is at a more direct angle the intensity of the heat is more……intense! (Just as a matter of interest on Midsummer’s Day, 21st of June, there are 16 hours and 47 minutes of sunshine in Ireland and the midday sun beams down at 61.2 degrees while on 21st of December there are a mere 7 hours and 42 minutes of sunshine hitting us at an acute 14.4 degrees)

Greetings and welcome to the East Waterford Beekeepers’ Association blog.  My name is Micheál Kavanagh and I’ve been keeping bees since 2003. Here I hope to keep a diary of what we should (and shouldn’t) be doing during the Beekeeping Year as well as generally sounding off on all bee-related stuff. Please feel free to offer your own opinions on what appears here. As we all know, if you want 5 different opinions on beekeeping procedures just ask 2 Beekeepers!! This blog (at least I think that’s what this is) will contain my opinions on bee stuff (If you don’t like my opinions… I have other ones!). By readers discussing, dissecting and disagreeing with these opinions, well, it will help us all learn.

We’ve all ended up as keepers of bees and our reasons and journeys to where we are today are many and varied. If you’re interested in hearing about how I became a beekeeper click How I Bee-gan!

To me, the beekeeping year ends at the end of September. The harvest is in. Bees are fed. Varroa has been treated. Mouseguards are in place. We can do no more for our wee bee friends except drop in now and again to see that the hives are upright and roofs are in place.

Mike Hughes, our association Chairperson, likes to give his hives a Christmas present of baker’s fondant just because he cares! This is probably a good habit as, if stores are getting low, the fondant can get the hive through the latter stages of February/March.

Unlike most insects, our bees do not hibernate. Instead, they form a cluster in the centre of the hive and, when the temperature drops, they vibrate to generate heat (humans shiver for the same reason). This vibrating, while generating heat, also uses up energy and so the bees are constantly dipping into their stores to maintain their energy levels. Surprisingly, in a mild winter bees tend to use up their stores much more quickly. This is because on a mild day, instead of remaining in the hive in the cluster (which actually uses up very little energy), the bees will leave the hive on a “cleansing flight” (it is as it suggests!). As there are no sources of nourishment available outside the hive the bees come home with a fierce hunger on them and have a feed. So considering the mild weather of late, this may become an issue later in the year.

At our AGM one of our members, Eddie Fitzgerald, brought in this!

On closer inspection, hopefully, you’ll notice something in the bottle

Best leave it to Eddie to explain….

“The following is brief account of how honey comb came to be in this porter bottle as I can recall it some fifty years later.
While examining a disused C.D.B. hive back in the mid 1960’s with a beekeeping friend (who had been given this hive by a neighbour of his) we discovered that a number of porter bottles had been placed in the cavity over the brood frames.   It appears that sometime later a swarm of bees took up residence in the hive and filled the space over the frames with brace comb and also built comb inside the bottles.  They must have died out sometime later as no bees or honey were present when we examined the hive.”

We thank Eddie for the information and for bringing the bottle and its amazing contents to the meeting.